Our homecoming from Cali was magical! I haven't had a chance to stop and really post about it until now. Caleb & Connor were trying to "hide" behind some chairs at the airport so that they could jump out and say "SURPRISE!" with their sign that they made. 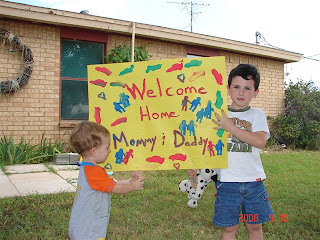 The only thing was, I think they literally went into a state of shock when they saw us! They stood up to try to yell their surprises, but they just stared... O.O Bless their hearts. Perhaps they had forgotten what we looked like and were trying to figure out if it was really us. I don't know. But the 4 of us just stared at one another. And then, as if a referee blew a whistle to start a game, we all ran to one another to hug! Once Caleb got a hold of me - he did. not. let. go. For hours he did not let go. As a matter of fact, he had to touch me (in one way or another) the rest of the day until he fell asleep that night. I had to reach back into the back seat to hold his hand on the way home from the airport! Every few seconds he would mutter, "I love you, Mom." "I missed you, Mommy." "I'm glad you came home to see me, Mom." Over and over... and this actually went on for several days. We have just enjoyed being together as a family again so, so much. While I don't EVER want to be away from my kids that long - ever again - the overwhelming emotion of such a homecoming was so magical that I wouldn't mind feeling that again... and again... and again.
Posted by Carey at 4:16 PM 1 comment:

The Breakdown of the Cali Vacay

Well, well... where do I begin... I had such high hopes of blogging on a regular basis this month and - here it is - basically the end of the month, and I've yet to make an entry. Don't get me wrong, I've tried to several times... nothin. But now I have something great to share - our CALIFORNIA VACATION! Woo-hoo!!!! Disclaimer: this vacation was for Bill & Carey. Caleb & Connor stayed home with the grandparents. *THANK YOU, GRANDPARENTS!!*
We started out in beeeyooootiful Laguna where we went to a little place called Aliso Beach and walked up and down the beach - getting a little more wet than we had anticipated! We enjoyed listening to the sound of the waves, looking at little sea creatures in a tide pool, and feeling the sand between our toes. 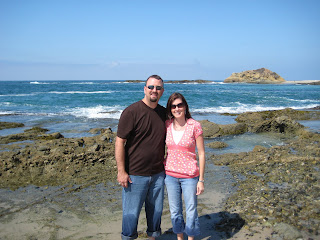 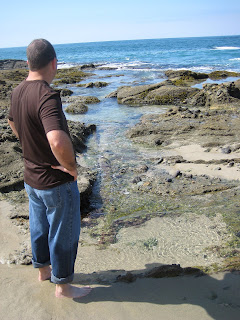 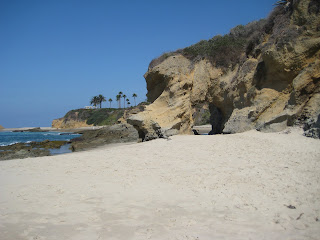 We had dinner at a Japanese place called Yamato when Royce (Bill's brother) drove up from San Diego. He shared his sushi with Bill while I simply stayed true to my fried rice! 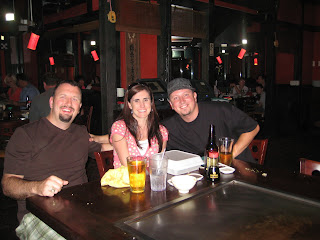 Then we moved on to Newport Beach and hung out on Balboa Island for a while. It was really nice! We did the beach thing again and found a treasure's worth of shells for Caleb to marvel at. We've enjoyed checking them out since we've been home! Watching the waves crash under the pier was pretty cool! 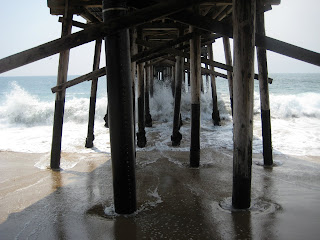 Our time in the beach area came to a close and we headed for Palm Desert. I told Bill I couldn't believe we were leaving home (where there were unusually cool, rainy days) to go to the stinkin' desert where it was 110 degrees!!! IT. WAS. HOT. Oh - and there was a freaky-weird sand storm just as we hit the edge of town... made me think of the movie The Mummy. Ca-reepy! 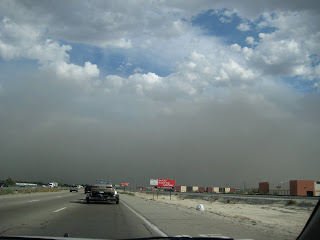 Once we were there, we checked out the downtown area of El Paseo, went to the outlet malls of Cabazon, went to the Living Desert - oh my GOSH was it ever HOT! We also drove back to the LA area where my dear friend Nissy lives. She took us on our own personal tour of Hollywood, Burbank, Beverly Hills, etc. Her husband works for Fox Studios and creates amazing sets for Prison Break. He took us on a personal tour of "his" set and explained all of the things that he does. It was so cool! Bill LOVED it!! Then we went to dinner with them and 3 of their 5 kids. I think that was the absolute best part of the whole trip! *Love and miss you Nissy!!! Thanks for everything!* 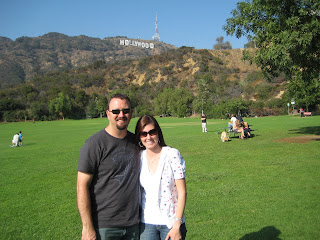 We drove to Anaheim a couple of days after that and went to Disney and California Adventure. That's when we officially felt horribly guilty for not having the kids with us. However, we noticed soooo many parents sitting next to a stroller with a too-young-for-rides kid, and we noticed how bored, tired, and frustrated they looked while (obviously) waiting on the other parent to finish a ride with the sibling(s). We talked about how that would so NOT be fun, and Connor would have been miserable. Basically - we tried to make ourselves feel better!!

Let's see... that takes us to Temecula. We went there because Bill had a meeting there for work to get his update credits for his licensing. The meeting was short - I took the time to get a pedi and check out the mall. Afterward, we went to Old Town in Temecula. Kind of like a California version of Fredericksburg. We had fun.
Finally... Friday... our SECOND Friday of the vacation. So far, I've made it sound as if Bill & I had nothing but a grand time of gallivanting around like a couple of newlyweds. Truth be told, we were both down in the dumps from missing our kids, and we tried EVERY DAY to get airfare home... but we just couldn't do it... it would've cost more than our original trip. :o( Anyway - Friday came and we just hung around the resort - did laundry, read by the pool, packed up. Never had I been so excited to do laundry and pack a suitcase in all my life!!!

And then... *BIG SIGH*... Saturday. Glorious Saturday! The best day of vacation - the day we got to come home to our kids!
Posted by Carey at 3:04 PM 4 comments: