I Should Be Working...

But, guess what? Um... I'm not. I'm sitting in the quiet of my shared office while everyone else is out hustling and bustling. Yesterday was the first time in weeks that I haven't been a wad of worry over the upcoming culmination of my time as a TSR! Mentor. I think that it probably has something to do with the weekend that led to yesterday's letting go of some of that worry. ::shrugs:: I spent the weekend in New Braunfels at the T Bar M Resort on a Women's Retreat with some amazing women from my church.

I have to begin by being very honest... I wasn't looking forward to this retreat the week leading up to it. I was thinking of all of the things I needed to be doing - should be doing - and thinking how I was just taking time away from my kids and my to-do list(s). However, knowing the check had already cleared for my retreat payment, I packed my things. We headed down to the resort Friday. It was nice and cool when we got there, and the facility is just beautiful. We enjoyed a good message and some great music in the cool night air. We sat by a fire and enjoyed s'mores. It was good. But little did I know what was to come...

Saturday we had a great message, and I think I've quoted Jill 100 times already saying, "If Satan can't make you bad, he'll make you busy!" Amen to that. After some quiet time, some Low Ropes Exercises that were PHENOMENAL and lunch, we broke up into pairs and groups to go do our own thing. I went shopping with a few friends - even though I said I would NOT and that I would NOT spend any money! I did. And I'm actually wearing one of my new shirts today. : \ We made it back in time for the High Ropes activities that, like shopping, I said I would NOT participate in. Well, I participated... a little. I refused The Screamer, but I screamed and cheered for my brave friends while I kept my coward feet on the ground. I wanted so much to move on and do the Zip Line! Woo-hooo! However, to get to the fun part, you have to do a not-so-fun part... a scary part... a hard part... I almost said no because of that, but decided that sometimes you have to make it through the "rough parts" to enjoy "the ride." So I did... almost in tears from the height and breathing as if I were in labor, I climbed to the top of a telephone pole, crossed a tight rope, and made it to "the ride." I heard cheers and encouragement from my friends below, and THAT is what got me through the "rough part." And then, during "the ride," I was the one screaming! But screaming "Wooooooo-hoooooooooo!" and giggling and loving what I had conquered. Thank you, God, for the ride. 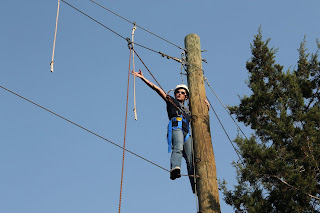 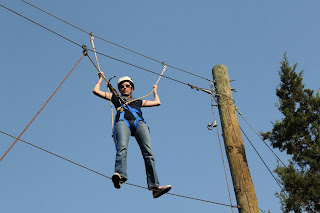 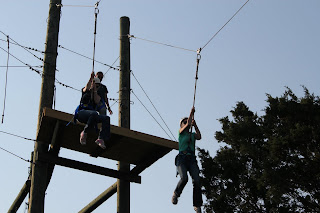 After that, a few of us - thinking we were still in our teens (or just dumb) decided to play a little sand volleyball. Oh, we had a grand time - eating sand as we dove for the ball like it was the high school state championship. How our arms stung when we (would actually) hit and volley the ball. But the giggles, the outright guffaws, the high-fives, and the "Stayin' Alive" cheers made the grit, grime, and groans so worth it! Then we moved on to worship, dinner, dancing (yes, we are Baptist!), and then...

Waking up Sunday was hard. It HURT. I. Am. Old. Blah. However, we went and had breakfast, had some Focus Time, and then Communion Service. It was so touching. I shared the Body of Christ with my mom as she served me the Blood - shed for me. And after that, my life took a turn. I awkwardly interrupted some friends talking - didn't know what to do - stood there like a doof - and finally left. I had to convince myself to only walk, as I wanted to RUN AWAY because I felt so dumb. But walk I did until I came to a beautiful, wooden swing in the trees where I sat and sobbed. I haven't been able to cry in SO LONG. And I so needed that.

And then... the part that I think of the most... was a certain someone coming to me to share part of herself with me. It's was heart-breaking and heart-warming all at the same time. And I now feel a connection to this person that I don't think I can even lose. (At least, I hope I will never lose.) It was just so funny to find out that for years now we have had the same thoughts about SO MANY THINGS in life - and even about each other! Just astounding, really.

This weekend was just what I needed... and then some. I am so thankful for every ache, bruise, bug bite, secret, tear, giggle, hug, and friend I experienced this weekend. Thank you, Lord!